Fat Grafting for Facial Aesthetic Rejuvenation: Atrophy of the skin and volume loss have been recognized as two of the major factors involved in facial aging, contributing to the formation of facial rythids, skeletonization, and pseudo-descent of the mid-face.

Early signs of facial aging involve the periocular and perioral areas. They include thinning of the eyebrows, deepening of the superior sulcus, infraorbital hollows, atrophy of the mid-face, naso-labial folds, marionette lines, and lip atrophy.

Some volume defects, such as tear trough deformity and deep upper sulcus, can be iatrogenic following an overly aggressive excisional blepharoplasty or may have a constitutional basis and be evident since adolescence or early adulthood.

Volume restoration of the face is regarded as a key step in facial rejuvenation and is commonly addressed with autologous fat transfer.

Traditionally, autologous fat grafting is based on Coleman’s harvesting technique with a 2mm side port cannula, followed by a fat injection in the deep pre-periosteal plane with a blunt cannula.

Because of the limitations of this technique, which include unpredictable fat survival and the potential for visible lumpiness, various authors have recently focused their attention on micro-fat grafting.

Reported advantages of micro-fat grafting include the possibility to treat the periocular area,4,5,6 a superficial implant using syringe needles, and the presence of higher content in stem cells compared to the traditional Coleman’s technique.

The micro-fat preparations proposed so far are based on various fat processing methods that take place upon completion of the traditional harvesting technique and use either collagenase-digestion or manual emulsification.

Strict legal limitations regulate the use of collagenase in humans, while manual centrifugation affects adipocyte viability.

We called this micro-fat grafting technique Superficial Enhanced Fluid Fat Injection (SEFFI), and we have used it in a large series of patients. Based on our clinical observations, SEFFI proved to be a safe and effective method to replace volume loss and correct skin atrophy of the entire face, including the periocular and perioral regions.

Recently we have given more importance to Contour Improvements and Tissue Regeneration in addition to Volume Restoration, In FACIAL rejuvenation correcting volume loss is not limited to volume restoration, but it also includes contour reshaping and skin regeneration, specifically in the periocular area.

This is the reason why we looked for various ‘types’ of fat that can offer more options based on the goal of our rejuvenation.

The SEFFI provides volume restoration, contour enhancement, and skin regeneration at the same time. If we need to restore a large volume of fat, we will harvest the larger .8 SEFFI, while for more delicate areas, we will use the finer .5 SEFFI.

Manual aspiration of the fat was performed with a 10cc syringe mounted alternatively with two different multi-perforated side-port cannulas. Both cannulas were 20 cm long, with a 2 mm diameter and side ports of either 0.5mm or 0.8mm (Figure 2).

Preferred harvesting sites for structural fat are the fat-rich areas such as the sovrapubic, the hips, trochanteric, and the medial part of the knee.

After the aspiration syringe was filled, the fat was mixed with cold Ringer’s solution to rinse the fat from the anesthetic and facilitate fat precipitation; the syringe was then capped and kept in a dark environment under a sterile cloth to reduce potential adipocyte light oxidation during this time frame. The 0.5 and 0.8 fat samples were kept in separate, labeled syringes.

The fat was centrifuged for 1 minute at 2000 rpm, with an estimated gravitational force of 448g. The PRP was obtained harvesting blood from the patient vein directly into four 4.5 mL citrate-containing Vacutainer tubes and centrifuged at 1000 rpm for 2 minutes.

The concentrated PRP was taken with a sterile syringe and mixed with the fat to obtain a final concentration of 10% of the total fat harvested. The end result of this process is an enhanced fluid fat that can be injected with a small syringe needle under minimal digital pressure.

The choice of needle size was based on the smallest size that allowed easy exit flow under minimal pressure to facilitate a uniform distribution of the fat, even though the 0.5 SEFFI proved small enough to exit through 25G and 27G needles.

The finer 0.5 SEFFI is injected using multiple 1cc syringes mounted with 23G needles at the level of the orbicularis muscle of the upper eyelid sulcus, brow, lower lid, tear trough, infraorbital hollows, and sub-dermally in the perioral area.

In figures 2e-2f and 2g-2h before and after of fat grafting associated with blepharoplasty. 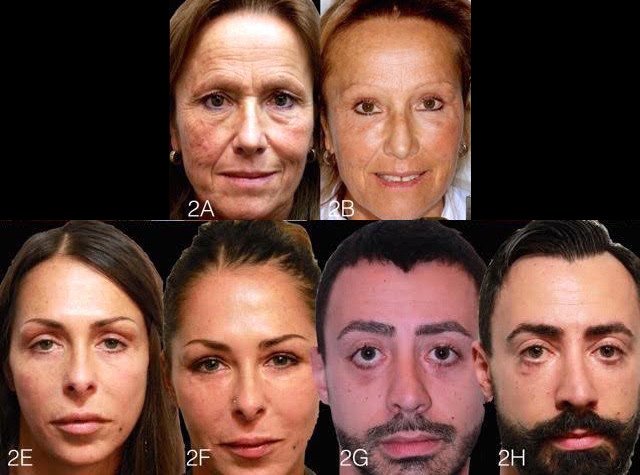