Eyelid ptosis, also called droopy eyelids: ptosis is the medical term that refers to an abnormally low position of one or both upper eyelids. This lowering of the upper eyelid margin may cause a reduction in the field of vision when the eyelid either partially or completely obstructs the pupil. Most common forms in adults occur because of aging and affect both eyelids asymmetrically; in children, it is most commonly unilateral and is congenital. 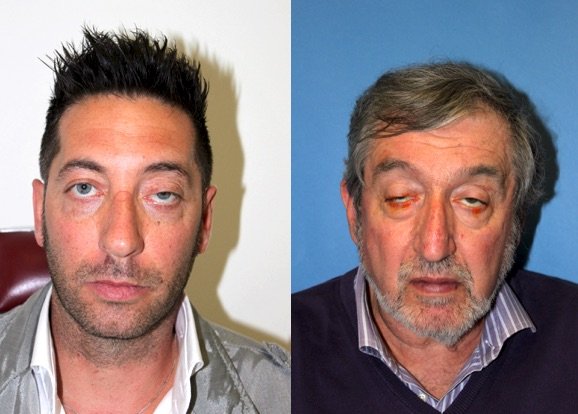 Patients with ptosis often have difficulty keeping their eyelids open in severe forms, but initially, they can only notice a ‘tired, sleepy’ look. To compensate, they will often arch their eyebrows in an effort to raise drooping eyelids. In severe cases, people with ptosis may need to lift their eyelids with their fingers to see. Children with ptosis may develop amblyopia (“lazy eye”) or developmental delay from the limitation of their vision.

There are many causes of droopy eyelids (ptosis), including age-related weakening of the muscle, congenital weakness, trauma, or sometimes neurologic disease. As we age, the tendon that attaches to the levator muscle, the major muscle that lifts the eyelid, can stretch and cause the eyelid to fall. Basically, this is part of a normal aging process and doesn’t require extensive medical attention. At the same time, an ophthalmologist should be able to recognize forms of ptosis related to significant medical conditions such as those occurring secondarily to myasthenia gravis or other muscular dystrophies.

Ptosis of eyelids can be corrected surgically and usually involves tightening the levator muscle to elevate the eyelid. The procedure is similar to that of an upper eyelid blepharoplasty, with minimally invasive scars; it differs from a blepharoplasty for the subsequent step of tightening of the levator muscle, an action that requires extensive anatomy and physiology of the eyelid and eye, and for that reason best performed in the hands of an oculoplastic surgeon.

In severe ptosis, when the levator muscle is extremely weak, a “sling” operation may be performed, enabling the forehead muscles to elevate the eyelid(s). The ‘sling procedure’ works best for the forms of muscular dystrophies and congenital ptosis.

Other types of repair may include surgery on the muscle on the inside of the lid in cases of small amounts of ptosis.

The surgeon will perform testing to determine the best form of correction for the individual patient. The goal is to elevate the eyelid to permit a full field of vision and achieve symmetry with the opposite upper eyelid. 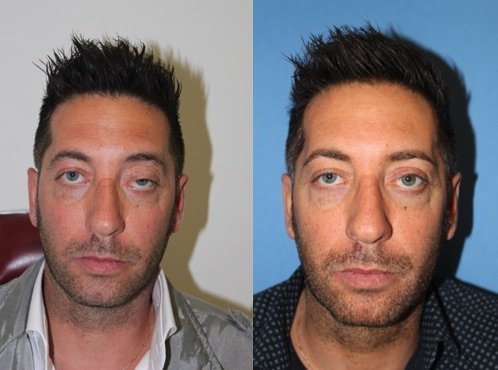 Example 1: on the left, the patient affected by congenital ptosis in the left side operated on previously elsewhere without any improvement was convinced there was no solution for his case. On the right is the same picture after the operation that involved ‘tightening’ of the muscle. 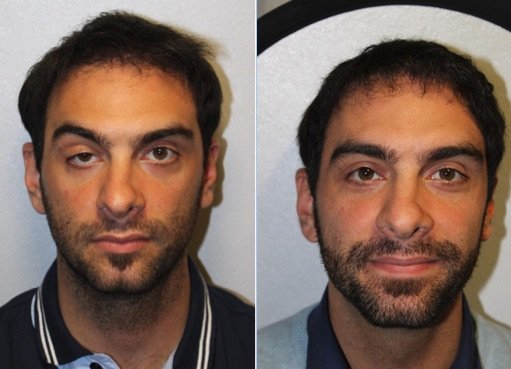 Example 2: Similarly to the patient above, on the left, this patient affected by congenital ptosis in the right side has been operated on previously elsewhere without any improvement. The picture on the right is the same picture after the operation that involved ‘tightening’ of the muscle.

When choosing a surgeon to perform ptosis surgery, look for a cosmetic and reconstructive facial surgeon specializing in eyelid surgery and had extensive training in ophthalmic plastic reconstructive and cosmetic surgery.

Example 3: patient affected by severe progressive bilateral ptosis limiting his visual axis; after the operation, both the functional and aesthetic aspects have been much improved. 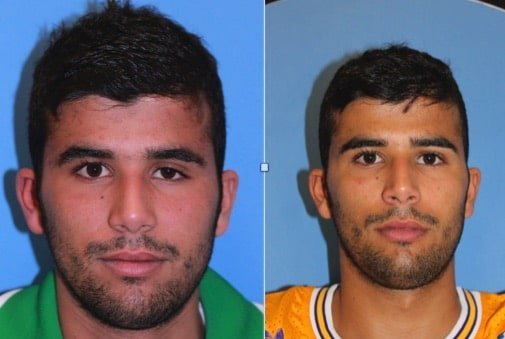 Example 4: Even a small amount of ptosis can alter the appearance, as shown in the picture on the left, where a slight congenital ptosis of the left eyelid causes a visible asymmetry. The correction of the ptosis gives a significant improvement.